For a few moments, it was like we had two suns. Or, well, one sun and one little sun.

A study recently released by scientists from Spain reveals that a lunar eclipse incident from January actually caused the temperature in that area to rise to sun-like levels.

In January earlier this year, scientists managed to capture a rare phenomenon on camera: a meteorite striking the Earth at 38,000 miles per hour right in the middle of a total lunar eclipse.

Due to the eclipse, a network of eight telescopes, MIDAS (Moon Impacts Detection and Analysis System), was focused on the Earth’s natural satellite and captured the entire event on video.

Jose Maria Madiedo, an astrophysicist at the University of Huelva and lead author on the study says, “Something inside of me told me that this time would be the time.”

Indeed, it really was the time. A space rock by the size of 1-2 feet weighing 45kg hurtled towards the moon, instantly crashing into its surface and generating debris that reached 5,400 degrees Celsius (9,750 Fahrenheit). This is roughly the same temperature as the sun’s heated surface. 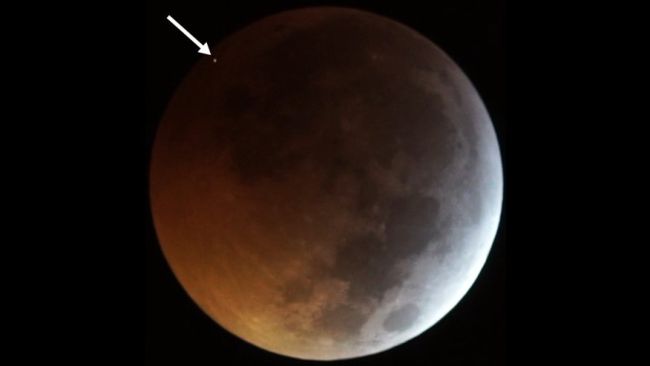 Madiedo says that this incident was only possible on the Moon since unlike the Earth, it doesn’t have the kind of atmosphere that can burn up most relatively small space rocks upon entry.

He also adds, “It would be impossible to reproduce these high-speed collisions in a lab on Earth. Observing flashes is a great way to test our ideas on exactly what happens when a meteorite collides with the moon.”

In this article:Eclipse, Moon, space, Spain, temperature
Up Next:

El Nino Proven To Have Worsened Over 400 Year Period

Here’s Why Astronauts Become Younger After Going To Space

How can something so hot be so cool? Here’s something to cogitate on: the things on this planet that we...

He’s gonna do his best. NASA has been assembling a new Mars rover to replace the lost Opportunity for a...

It’s not an animal in the traditional sense. Animals need to breathe oxygen. I breathe, you breathe, we all breathe...